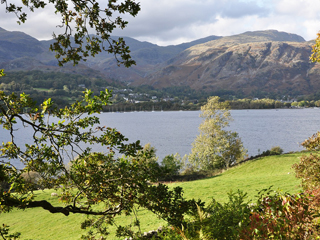 Coniston is located on the western shore of Coniston Water in the Lake District National Park, Cumbria and was, historically, the location of ore and slate mining, and is dominated by Cumbria's highest peak - The Old Man of Coniston. The whole area is known for its rugged peaks, lakes and pretty towns and villages. Coniston is the start of the stunning walk known as the Coniston Round which passes some of the most breathtaking scenery the National Park has to offer. As the walk's name suggests, it is a circular walk exploring Coniston Water and the looming Fells, the gentle slopes of Tarn Hows which is cared for by the National Trust, then onwards leading to The Old Man of Coniston.

Coniston Round is a high mountain route with well-established paths and frequent trail markers. The landscapes and the views of Coniston Water are stunning. The lake is 5 miles long and quite narrow at less than half-mile wide. It is the third largest lake in the area. The village of Coniston stands on Church Beck and the grave of John Ruskin, the artist, is in the village churchyard. Starting from Coniston, this highly enjoyable walk takes in landmarks and sights such as Brim Fell, Levers Hawse, Swirl Howe, Prison Band, Black Sails, Wetherlam, Hole Rake Pass, Coppermines Valley and Miners Bridge. The Coniston Tourist Information Centre has more local information on the various walks available.


Designated trademarks, logos, brands and images are the copyright and/or property of their respective owners.